Short answer: use not set(a).isdisjoint(b), it’s generally the fastest.

There are four common ways to test if two lists a and b share any items. The first option is to convert both to sets and check their intersection, as such:

Because sets are stored using a hash table in Python, searching them is O(1) (see here for more information about complexity of operators in Python). Theoretically, this is O(n+m) on average for n and m objects in lists a and b. But

The second way to do it is using a generator expression performing iteration on the lists, such as:

This allows to search in-place, so no new memory is allocated for intermediary variables. It also bails out on the first find. But the in operator is always O(n) on lists (see here).

Another proposed option is an hybridto iterate through one of the list, convert the other one in a set and test for membership on this set, like so:

A fourth approach is to take advantage of the isdisjoint() method of the (frozen)sets (see here), for example:

If the elements you search are near the beginning of an array (e.g. it is sorted), the generator expression is favored, as the sets intersection method have to allocate new memory for the intermediary variables:

Here’s a graph of the execution time for this example in function of list size: 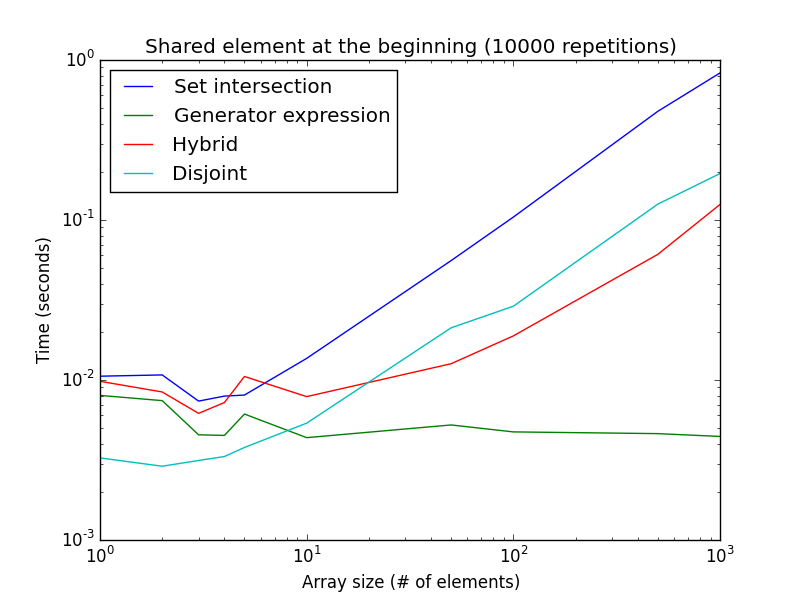 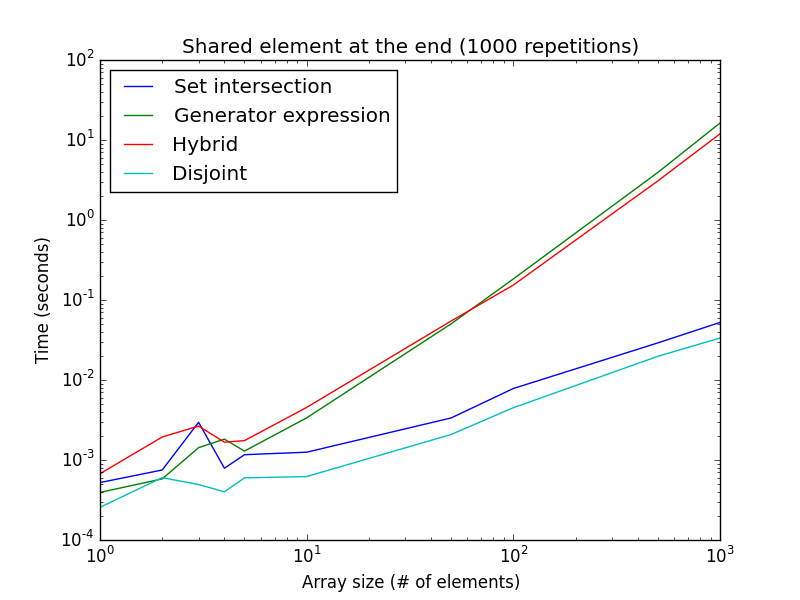 It is interesting to note that the generator expression is way slower for bigger list sizes. This is only for 1000 repetitions, instead of the 100000 for the previous figure. This setup also approximates well when when no elements are shared, and is the best case for the disjoint and set intersection approaches.

Here are two analysis using random numbers (instead of rigging the setup to favor one technique or another): 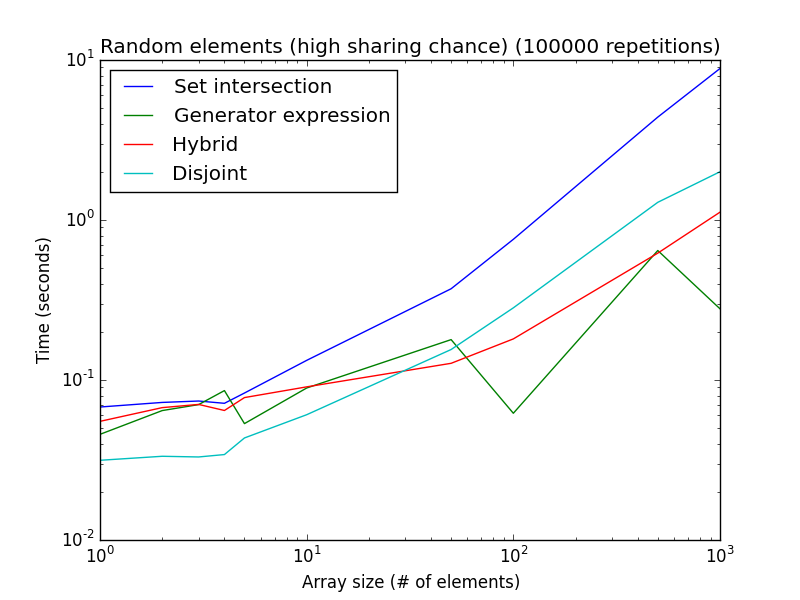 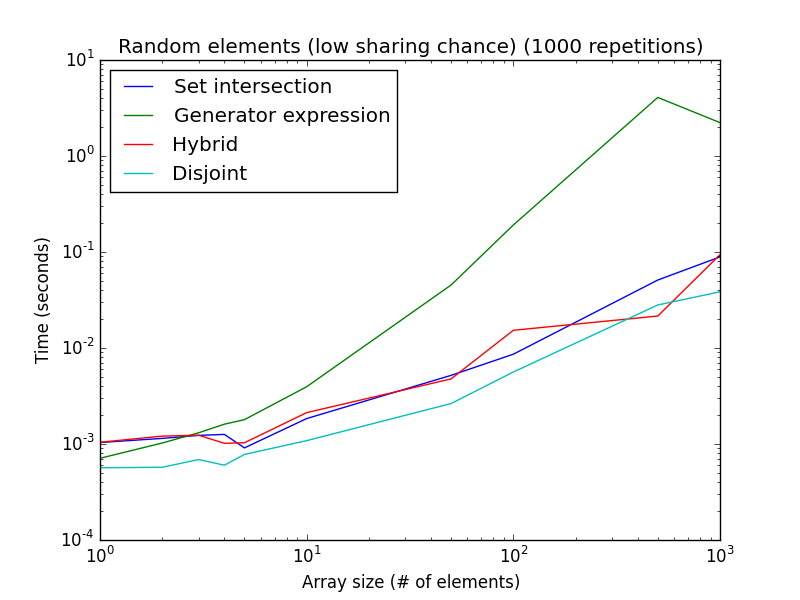 Up to now, this analysis supposed both lists are of the same size. In case of two lists of different sizes, for example a is much smaller, isdisjoint() is always faster: 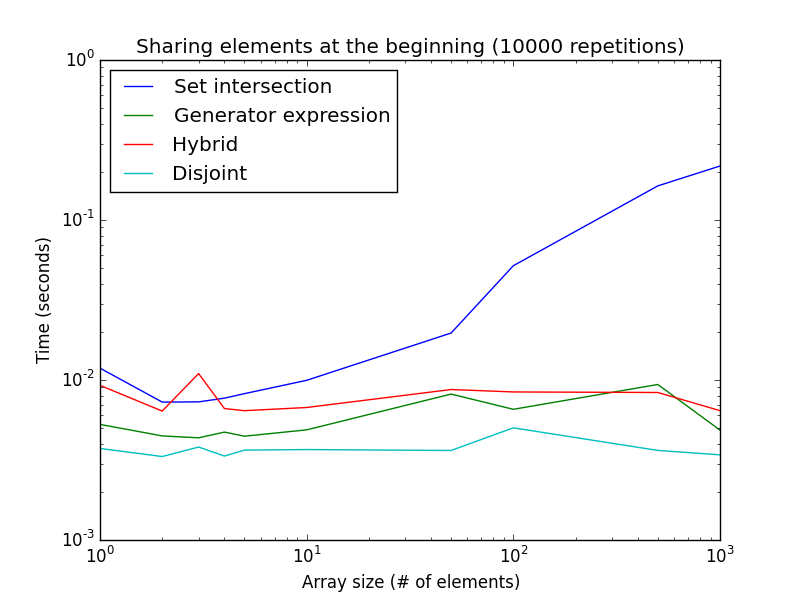 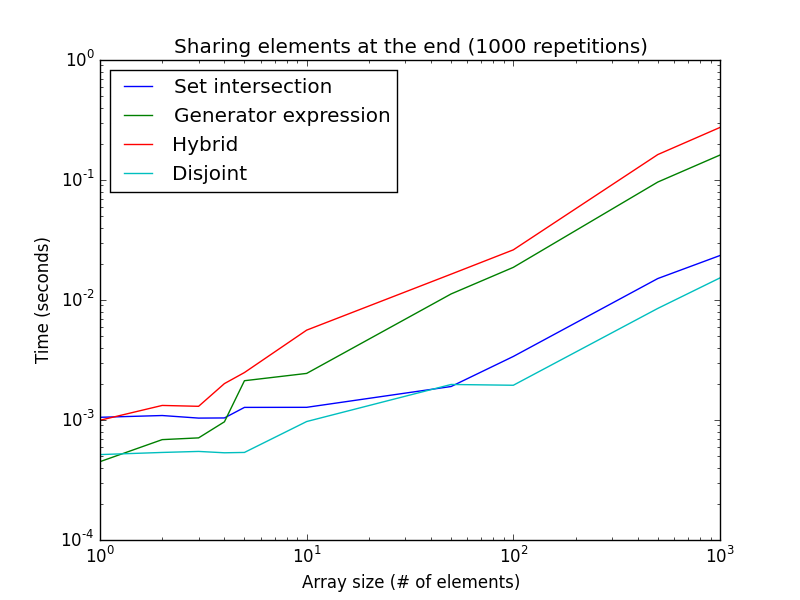 Make sure that the a list is the smaller, otherwise the performance decreases. In this experiment, the a list size was set constant to 5.

In most cases, using the isdisjoint() method is the best approach as the generator expression will take much longer to execute, as it is very inefficient when no elements are shared.